London, Thursday 25 January 2018 – Authors of some of the most successful books of 2017 have been honoured at The Nielsen Bestseller Awards. The prestigious event was held at London’s May Fair hotel and hosted by presenter, Mariella Frostrup.

The awards were given in three categories – Non-Fiction, Fiction and Children’s books.

Paula Hawkins was honoured following another stellar year where her debut The Girl on the Train became the bestselling novel of the last six years, and picked up a triple Platinum Award. Cecelia Ahern’s PS, I Love You was also awarded with Platinum in 2017.

Fiction was one of 2017’s most popular categories honoured. In total, 36 titles received awards for reaching either Silver, Gold or Platinum status. Some of the most decorated authors in this category included Maggie O’Farrell and Jill Mansell, both awarded with four Silver Awards, and C.L. Taylor, who picked up two Silver Awards. 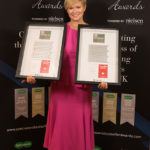 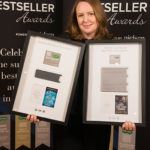 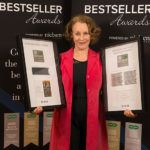 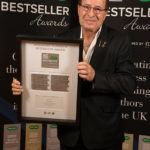 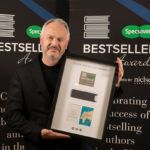 The Platinum Bestsellers this year were dominated by Children’s books. Authors honoured with Platinum Awards included Jeff Kinney for his books Diary of a Wimpy Kid: Rodrick Rules and Diary of a Wimpy Kid: Dog Days and David Walliams for Grandpa’s Great Escape, whilst there were two Platinum Bestseller Awards for Roald Dahl’s Matilda and The Twits. Liz Pichon (three Silver Awards) and Tom Fletcher (two Silver Awards) were also notable Children’s book authors in 2017.

Tom Fletcher, author of Silver Award-winning The Christmasaurus, said: “I’ve had such an incredible time over the last year. From meeting so many young readers at signings, to releasing a Musical Edition and putting on the first live shows, The Christmasaurus has taken me on such an amazing journey so far and with the movie in development it is so exciting to think that this is only the beginning. Picking up this Silver Award for a quarter of a million sales is like the icing on the (Christmas) cake. Thank you!”

Andre Breedt, Co-Managing Director, Nielsen Book, said: “Once again, we’re delighted to host and honour some of the bestselling authors the UK has produced. 2017 was another strong year for the industry, with sales keeping pace with the highs we saw in 2016. It was a year adult fiction continued its resurgence alongside the growing success of the domestic children’s book market and it is great to see so many of those authors here tonight.”

Dame Mary Perkins, co-founder of Specsavers, said: “The Specsavers Bestseller Awards, powered by Nielsen, is a wonderful event celebrating the best of the best. It is hugely inspirational to see so many accomplished authors together under one roof, and to be able to champion their achievements. Each and every one of this year’s winners is truly deserving of their accolade. Reading is something that Specsavers is very passionate about, as of course good eyesight plays an essential role in it. We’re delighted to be a part of this important programme for the second year running.”

Other authors to reach Platinum status included Sir Alex Fergusson for My Autobiography and the Hairy Bikers’ Simon King and Dave Myers for The Hairy Dieters as well as Lee Child for the first in his Jack Reacher series, Killing Floor.

The bestselling title of 2017 was Jamie Oliver’s 5 Ingredients, which picked up a Gold Award, with over half a million copies sold since last August.