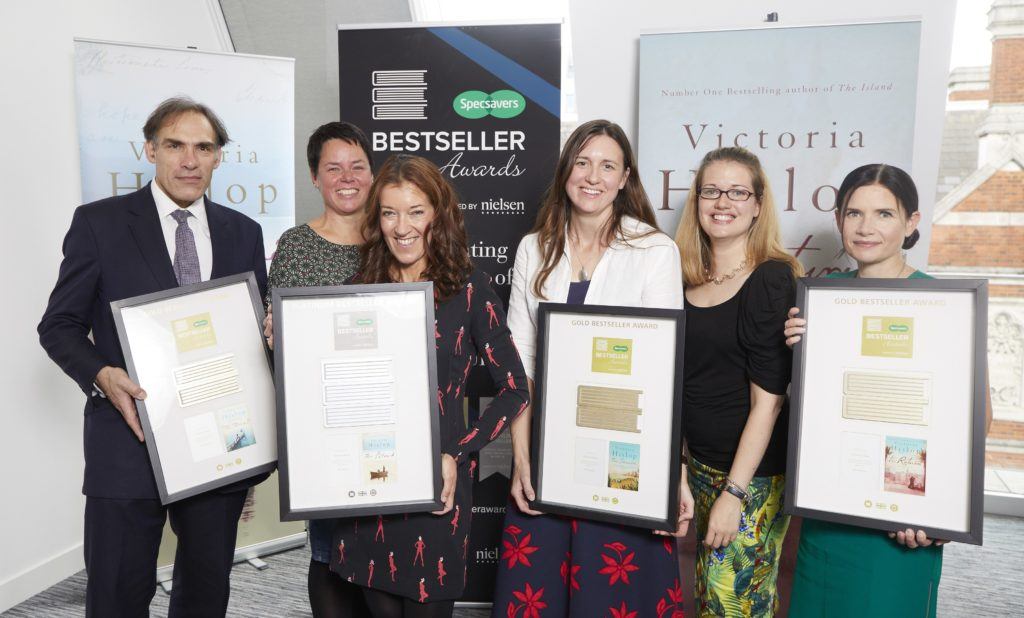 Victoria Hislop has been awarded FOUR Nielsen Bestseller awards.  Her chart-topping debut novel, The Island, has now sold over a million copies and receives a Platinum award, with Gold awards being awarded for sales of over half a million copies for The Thread, The Return and The Sunrise.

These awards celebrate the most successful books in Britain based on actual sales measured by Nielsen Book.

Hislop was handed the awards at a ceremony at the Hachette offices in central London on the 14th September, on an occasion to mark her huge success as one of Britain’s leading novelists.

Mari Evans, Managing Director of Headline and her publisher said: ‘Victoria is fast achieving national treasure status as a novelist. Her unique brand of storytelling, which is wholly immersive and so very evocative of place, has always resonated strongly with readers – and not only in the UK. Her domination of bestseller lists around the world means she is beloved by millions. Victoria encourages the most creative approaches to publishing in the teams that work with her and as one of those team members, I couldn’t be more delighted to see this tangible recognition of her bestseller success.’

Andre Breedt, Managing Director of Nielsen Book, said: ‘We are delighted to be able to recognize great sales of any title, but to be able to recognize four bestselling titles from the same author is an amazing achievement. And with her latest novel, Cartes Postales from Greece, at the top of the charts at the moment, an award for Victoria’s fifth bestselling novel can’t be far away!’

Dame Mary Perkins, co-founder of Specsavers, said: ‘Since her debut novel was first released, Victoria Hislop’s books have become synonymous with sandy beaches and salty air – the perfect holiday reads. It’s such a pleasure to see her huge achievements rewarded with the Specsavers Bestseller award – it is very well deserved.’

Inspired by a visit to Spinalonga, the abandoned Greek leprosy colony, Victoria Hislop wrote The Island in 2005. It became an international bestseller and a 26-part Greek TV series. She was named Newcomer of the Year at the British Book awards and is now an ambassador for Lepra. Her affection for the Mediterranean took her to Spain, which inspired her second bestseller The Return, and she returned to Greece to tell the turbulent tale of Thessaloniki in The Thread, shortlisted for a British Book award and confirming her reputation as an inspirational storyteller. It was followed by her much-admired Greece-set short story collection, The Last Dance and Other Stories. The Sunrise, a Sunday Times Number One bestseller about the Turkish invasion of Cyprus, was published to widespread acclaim in 2014. Victoria Hislop’s latest book, Cartes Postales from Greece, is fiction illustrated with photographs. It was a hardback Sunday Times bestseller and one of the biggest-selling hardback novels of 2016. The paperback edition, published in August 2017, is a Sunday Times Number One bestseller.