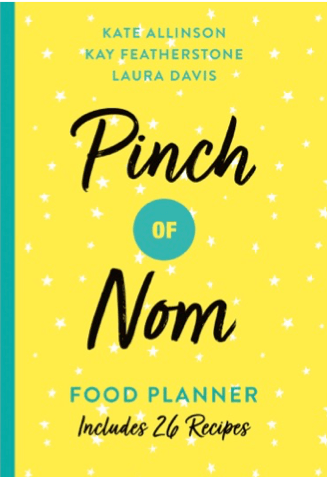 On 13 June 2019, publisher Bluebird published a second Pinch of Nom title, Pinch of Nom: Food Planner to accompany the bestselling cookbook. The planner is a weekly journal to chart slimming progress, plan weekly meals and to inspire Pinch of Nom fans to reach their goals.

Echoing the success of the cookbook, Pinch of Nom: Food Planner is the second bestselling title in the Family, Health & Relationships category this year, the 13th bestselling Non-Fiction title of the year and is within the Top 35 in the Diet & Fitness category since records began.

On hearing they had sold a combined total of 1 million books in the UK, Kay & Kate said:

“It’s going to take a long while for this to sink in! We’re overwhelmed and in awe of the response to both the Pinch of Nom book and the planner. We can’t thank those who have believed in us enough. It’s beyond belief!” – Kay and Kate, Pinch of Nom

“Working with Kay and Kate and the Pinch of Nom team has been a huge career highlight for me.  Their cookbook has sold in every channel and seemingly to most UK households. Their delicious, healthy recipes have such a wide appeal: people looking for hearty family favourites, slimmers, people looking for simple dishes that are easy on the budget. Pinch of Nom has them all covered. We are thrilled to see Kay and Kate break another record in such a short time.”

Bluebird announced earlier this year that it has acquired two additional Pinch of Nom titles from agent Clare Hulton, details to be announced.