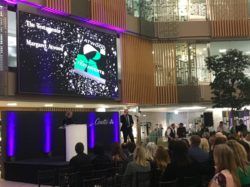 London, 23 January 2020 – ​Nielsen hosted its annual Bestseller Awards ceremony, in association with Coutts, the wealth manager and private bank, to honour authors of the most successful books of 2019. Held in the prestigious Coutts atrium, authors from across three primary categories – Fiction, Non-Fiction and Children’s – received top honours for significant lifetime sales of their titles as measured by Nielsen BookScan and PubTrack Digital across both print and e-book formats. ​Mariella Frostrup was the host of this year’s Nielsen Bestseller Awards.

The awards categories are based on sales volumes – Silver (250,000 sales), Gold (500,000 sales), and Platinum (1,000,000 sales). The authors being recognised have all reached significant sales milestones and have helped contribute to another robust year for the UK book industry, totalling 191m print books sold last year to the value of £1.7bn. In total, 26 titles were awarded either Silver, Gold or Platinum status.

This year, the Platinum Bestsellers are split across all three categories with eight titles honoured. For Fiction Jojo Moyes’ ​After You, Margaret Atwood’s The Handmaid’s Tale ​and Heather Morris’ ​The Tattooist of Auschwitz ​each crossed the threshold of 1m sales in 2019 and were awarded Platinum awards. Jojo Moyes also received a Gold award for ​Still Me ​and Margaret Atwood received Silver for ​The Testaments. Erica James was awarded two Silver awards for ​Tell it to the Skies​ and ​Love and Devotion ​and Cara Hunter received Gold for Close to Home.

Memoirs and healthy eating dominated Non-Fiction in 2019 with both Adam Kay and ​Pinch of Nom ​authors Kay Featherstone and Kate Allinson picking up two awards each. Adam Kay’s ​Twas The Nightshift Before Christmas achieved sales of over 500k in print and e-book, following on from the success of ​This is Going to Hurt ​which won a Platinum award. Pinch of Nom ​also achieved Platinum status and ​Pinch of Nom Everyday Light ​was awarded Silver. Ant Middleton’s ​First Man In: Leading From the Front ​was awarded Gold and Silver awards were presented to Fearne Cotton for ​Happy, Raynor Winn for​ The Salt Path, Dolly Alderton for ​Everything I Know About Love ​and Henry Firth and Ian Theasby for their bestselling vegan cookbook ​BOSH!.

The Children’s category once again boasted familiar authors from the nation’s bestseller charts including David Walliams, receiving one Platinum award for ​Bad Dad as well as two Gold awards for ​The World’s Worst Teachers ​and ​The Beast of Buckingham Palace. Julia Donaldson and Axel Scheffler brought home another Platinum award for ​A Squash and a Squeeze ​and a Gold for ​The Scarecrows’ Wedding.​ ​ Liz Pichon continued her success, having been awarded six Silver awards previously, with another Silver for ​Tom Gates: Family, Friends and Furry Creatures.

Ian Rankin and Michael Morpurgo were inducted into the 21st Century Hall of Fame, having achieved significant official lifetime sales across all their titles. Ian Rankin has achieved combined lifetime sales of 9.7m in print and 1.6m in e-books. His most popular books are Doors Open, ​selling over 325k print copies, and ​Saints of the Shadow Bible​ which has sold over 158k e-books. ​Michael Morpurgo has sold over 8.5m print books with ​War Horse ​being his most popular having sold 567k paperbacks since publication in June 2017. He has also sold 257k e-books with ​Private Peaceful ​the most popular at 34k copies purchased.

“Once again, we’re delighted to host and honour some of the bestselling authors in the UK,” said Andre Breedt, Managing Director, Nielsen Book Research International.  “2019 was another strong year for the industry, with sales keeping pace with the highs of recent years. My warmest congratulations to all the winners, it is always a pleasure to celebrate with so many of you at our annual ceremony.”

“We are thrilled to be partnering with Nielsen once again for these awards”, said Simon Hopes, Managing Director, Coutts. “Coutts has a long and proud tradition in the literary world, counting Charles Dickens, Lord Alfred Tennyson and Bram Stoker as former clients. With a library here that dates back to 1850, storytelling is written in the very foundations of this organisation. Seeing so many accomplished authors under one roof, and sharing the celebrations of their achievements is extremely humbling and something everyone at Coutts is proud to support.”

Please see below the list of 2019 Nielsen Bestseller Awards:

For Non-Fiction:
Platinum
● Pinch of Nom ​by Kay Featherstone & Kate Allinson
● Sapiens: A Brief History of Humankind ​ by Yuval Noah Harari
● This is Going to Hurt ​by Adam Kay

Gold
● First Man In: Leading From the Front ​by Ant Middleton
● Twas The Nightshift Before Christmas ​by Adam Kay

For Fiction:
Platinum
● After You ​by Jojo Moyes
● The Tattooist of Auschwitz ​by Heather Morris
● The Handmaid’s Tale ​by Margaret Atwood

For Children’s:
Platinum
● Bad Dad ​by David Walliams
● A Squash and a Squeeze ​by Julia Donaldson & Axel Scheffler