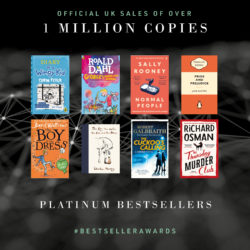 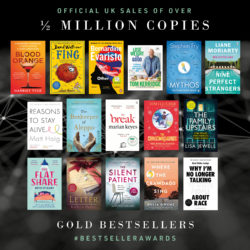 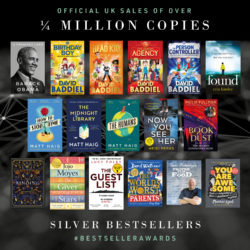 Debut novelist Richard Osman the standout success, as the only title to reach platinum status in the same year as publication. Matt Haig, Reni Eddo-Lodge, David Walliams and Tom Kerridge were also among those honoured.

London, 17 March 2021–The Nielsen Bestseller Awards annual ceremony took place virtually this evening (Wednesday 17 March 2021) with Richard Osman, Reni Eddo-Lodge, Matt Haig and David Walliams among the prize-winners. The awards honoured authors of the most successful books of 2020, who in turn praised the booksellers for playing such a crucial role in not only selling books but also supporting their local communities.

Authors received honours for significant lifetime sales, as measured by Nielsen BookScan and PubTrack Digital across both print and e-book formats. The awards are based on UK sales volumes and were presented to those that passed sales thresholds during 2020 – Silver (250,000 sales), Gold (500,000 sales), and Platinum (1,000,000 sales). Twenty-seven titles were awarded Silver, Gold or Platinum status and the sales have helped contribute to another robust year despite the challenges that lockdown brought to the retail sector of the UK book industry with Nielsen Book estimating the total year at 202m print books sold to the value of £1.8bn.

All titles that achieve Platinum status are inducted into the 21st century Hall of Fame, which now includes 149 titles. In 2020, eight books passed the Platinum Award million copy sales threshold. Although published in 2019, Charlie Mackesy’s The Boy, The Mole, The Fox and The Horse was the bestselling title of 2020 and achieved Platinum status, as did Richard Osman’s The Thursday Murder Club. Richard thanked booksellers in his acceptance speech:

“More than anything, a big thank you to all the people who have sold the book, all the booksellers up and down the country – it was such a tough year in 2020, and I know that’s continuing at the moment. I hope in 2021 we can all sell an awful lot more books and I look forward to travelling across the country to meet many readers and booksellers.”

There were three children’s titles that achieved Platinum status: George’s Marvellous Medicine by Roald Dahl, Diary of a Wimpy Kid: Cabin Fever by Jeff Kinney and The Boy in the Dress by David Walliams & Quentin Blake. Sally Rooney’s Normal People and Robert Galbraith’s The Cuckoo’s Calling also became Platinum bestsellers, as did the oldest inductee into the 21st century Hall of Fame Pride and Prejudice by Jane Austen, originally published in 1813.

“Penguin Books first published Pride and Prejudice back in 1938, in a cheap paperback edition with woodcut illustrations. Since then Austen’s best-loved novel has been an evergreen bestseller for us, published in countless different editions over the years.

Matt Haig enjoyed a superb 2020 receiving a Gold award for Reasons to Stay Alive and three of his other titles achieving sales of over 250,000: How to Stop Time, The Humans and The Midnight Library — the paperback edition of which is currently a UK #1 bestseller.

“My favourite bookseller is The Marlow Bookshop, run by some lovely people. We’re so lucky to have a community bookshop, and we will always be supportive of it. There’s still something super special about your local bookshop, one that sells books with paper in them, not one you order on the internet!”

Gold Awards were also presented to: Reni Eddo-Lodge for Why I’m No Longer Talking to White People About Race, Beth O’Leary for The Flatshare, Lisa Jewell for The Family Upstairs, Harriet Tyce for Blood Orange, Kathryn Hughes for The Letter and Christy Lefteri for The Beekeeper of Aleppo.

Silver Awards were presented to: Lucy Foley for The Guest List, Bridget Collins for The Binding, Matthew Syed for You Are Awesome, Heidi Perks for Now You See Her and Erin Kinsley for Found. David Baddiel has crossed the threshold for four of his children’s books, The Person Controller, Head Kid, Birthday Boy & The Parent Agency.

“We are delighted to be celebrating the fifth Nielsen Bestseller Awards, albeit virtually on social media. It feels more important than ever to recognise and celebrate the incredible role books have played in our lives this last year. Whether it was reading for escapism or keeping us calm, helping to homeschool our children or the source of the best binge worthy TV series; books were and continue to be at the centre of our lives. Indeed without books, knowledge would not have transferred across the ages from diaries of former pandemics to medical journals contributing to new vaccines. Never have books been more needed, or appreciated.”