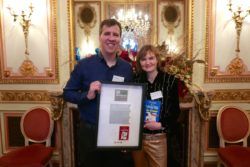 Penguin Random House Children’s held a breakfast at the Ritz in London on Monday (4th December 2017) to celebrate 10 years of publishing Jeff Kinney’s Wimpy Kid novels, and to thank the retailers and journalists who have supported the series.

Jeff Kinney received a Platinum Nielsen Bestseller Award for selling over a million copies of his first book, Diary of a Wimpy Kid in the UK. The whole series of Wimpy Kid novels have sold over 10 million books in the UK.

Kinney thanked booksellers for their support “Two years ago, I became a bookseller. I think putting a book into a kids’ hands is the closest we get to a sacred act. Putting the right book into their hands can create a lifelong love.”

Kinney was introduced by Francesca Dow, m.d. of Penguin Random House Children’s, who reminisced about first reading Kinney’s work and divulged that his books had encouraged her own children to become readers. She ended by saying: “Here’s to many more years of Wimpy Kid and making reading a joy for children.”