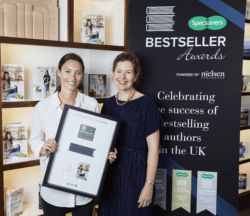 Ella Mills, Co-Founder & Creative Director of Deliciously Ella, has been awarded a Specsavers Silver Bestseller Award, powered by Nielsen, for her debut cookbook, Deliciously Ella, which has now sold over a quarter of a million copies in the UK.

The awards celebrate the most successful books in Britain based on actual sales measured by Nielsen Book.

Ella Mills, founder of Deliciously Ella, is an award-winning cookery author, entrepreneur, and champion of eating well. She started off with her popular blog, deliciouslyella.com, which has had over 110 million hits in the last three years. Her first book came out in January 2015 and has been the bestselling debut cookbook ever in the UK and a New York Times bestseller. She has since released a further three bestselling books, created a #1 app and, with her husband, opened three delis in London, as well as launching a product line across the UK. The products, launched in August 2016, are now stocked in over 3,500 stores, including Starbucks to Waitrose, Sainsbury’s, Ocado, WHSmith and Holland and Barrett. The couple will launch a range of breakfasts into retail in July 2017.

Mills was handed the award at a ceremony at the Hachette offices in central London on the 20th July on an occasion to mark the huge success of Deliciously Ella, first published in 2015 by Yellow Kite, as one of the fastest-selling debut cookbooks since Nielsen Book records began in 1998.

Liz Gough, Publisher at Yellow Kite, and Ella’s editor, said ‘It has been really exciting publishing Ella’s books over the last few years – seeing the reaction from retailers and fans alike when this first one was published was amazing. Deliciously Ella was a game-changing book and this award is really significant. Getting an award of this kind is a massive achievement for any author, but it’s particularly special for a first-time author launching a brand new cookbook. Everyone at Yellow Kite and Hodder is thrilled for Ella today.’

Andre Breedt, Managing Director of Nielsen Book, said: ‘We’re delighted to be able to recognise this astonishing sale – 250,000 copies – of Ella’s first healthy eating cookbook, a title that has played a key part in the resurgence we’ve seen in the genre over the past few years.’

Dame Mary Perkins, co-founder of Specsavers, said: ‘The healthy eating phenomenon is well and truly sweeping the country and Deliciously Ella is a firm favourite in our offices. Achieving such a significant amount of sales for a debut book is a real testament to Ella’s hard work, passion and commitment to her field. It’s a pleasure to be able to present her with this well-deserved award.’