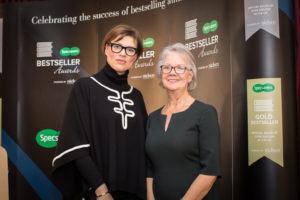 The ‘Class of 2016’ join the Hall of Fame alongside Honorary Platinum authors Martina Cole, Anthony Horowitz and Dame Jacqueline Wilson

The authors of some of the most successful books of recent years have been honoured at the Nielsen Bestseller Awards.

The prestigious event was held at Mayfair’s No. 4 Hamilton Place, hosted by highly respected journalist and broadcaster Kate Silverton. Authors and illustrators, including Caitlin Moran, Axel Scheffler and Jojo Moyes, accepted awards for books which reached significant sales milestones of 250,000 (Silver), 500,000 (Gold) or 1m copies (Platinum) during 2016, as recorded by Nielsen BookScan.

Awards were given in three categories – Non-Fiction, Fiction and Children’s. Recently published titles to receive Platinum Awards included body coach Joe Wicks’ Lean in 15; Paula Hawkins’ The Girl on the Train, which has gone triple platinum (three million sales) since publication in January 2015; Jojo Moyes’ Me Before You; and J.K. Rowling with co-authors John Tiffany and Jack Thorne for the script book Harry Potter and the Cursed Child.